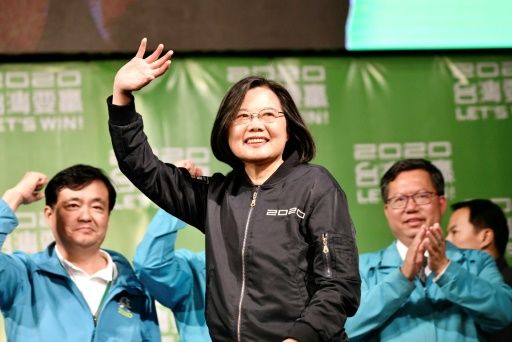 Tsai, 63, was greeted by thousands of jubilant flag-waving supporters outside her party headquarters, hailing a result which looks set to infuriate China.

“Today we have defended our democracy and freedom, tomorrow let us stand united to overcome all challenges and difficulties,” she told the cheering crowd.

Official results showed Tsai secured 57 percent of the popular vote with a record-breaking 8.2 million ballots, 1.3 million more than her 2016 victory.

Her main rival Han Kuo-yu, from the China-friendly Kuomintang, racked up 39 percent and conceded defeat.

The result is a blow for Beijing, which views Taiwan as its own territory and has made no secret of wanting to see Tsai turfed out.

Over the last four years it ramped up economic, military and diplomatic pressure on the self-ruled island, hoping it would scare voters into supporting Tsai’s opposition.

But the strong arm tactics backfired and voters flocked to her Democratic Progressive Party (DPP), fuelled in part by China’s hardline response to months of huge and violent pro-democracy protests in Hong Kong.

The result was welcomed by the United States, Taiwan’s primary military ally, with Secretary of State Mike Pompeo saluting Tsai’s “commitment to maintaining cross-Strait stability in the face of unrelenting pressure”.

Tsai pitched herself as a defender of liberal democratic values against the increasingly authoritarian shadow cast by China under President Xi Jinping.

Beijing has vowed to one day retake the island, by force if necessary. It loathes Tsai because she refuses to acknowledge the idea that Taiwan is part of “one China”.

Her campaign frequently invoked Hong Kong’s protests as a warning of what might lie ahead should China one day take control of Taiwan.

During her victory speech Tsai said she was committed to dialogue with China’s leaders and wanted peace.

But she called on Beijing to halt its sabre rattling towards Taiwan and respect the idea that only the island’s 23 million inhabitants can decide its future.

“Today I want to once again remind the Beijing authorities that peace, parity, democracy and dialogue are the keys to stability,” Tsai said.

“I want the Beijing authorities to know that democratic Taiwan and our democratically elected government will never concede to threats”.

But China is also Taiwan’s largest trade partner, leaving the island in a precariously dependent relationship.

Han, the 62-year-old mayor of the southern city of Kaohsiung, favoured much warmer ties with China — saying it would boost Taiwan’s fortunes — and accused the current administration of needlessly antagonising Beijing.

But his campaign struggled to gain momentum or escape the perception that he was too cosy with Taiwan’s giant neighbour.

Turnout in the poll was 75 percent, a jump of nearly 10 percent from Tsai’s first presidential election victory four years ago.

Official results showed the DPP managed to retain its majority in the island’s unicameral parliament with 61 out of 113 seats, while the KMT took 38 seats.

Tsai’s victory is the second major electoral setback for Beijing in recent weeks.

In November, Hong Kong’s pro-democracy camp scored a landslide win over pro-Beijing parties in district elections as the city convulses with months of anti-government protests.

“Tsai’s landslide victory is like a slap in the face to Beijing as Taiwanese voters say no to its intimidation,” Hung Chin-fu, a political analyst at Taiwan’s National Cheng Kung University, told AFP.

Joshua Eisenman, a foreign affairs expert the University of Notre Dame, said all eyes will be watching China’s response.

“Will the hardline position towards Tsai… be continued or will Beijing adopt a more ‘soft sell’ approach that is more carrot and less stick?” he said.

Taiwanese voters have watched events in Hong Kong closely because the financial hub is run on Beijing’s “one country, two systems” model.

China has suggested the same model could one day be applied to Taiwan if the island ever came to be controlled by Beijing.

But an increasing number of Taiwanese voters are spooked by that proposal.

“I don’t want Taiwan’s democracy to turn into how Hong Kong is now,” Dennis Wu, a doctor, told AFP as he cast a vote for Tsai in the capital Taipei.

Turnout in the poll was 75 percent, a jump of nearly 10 percent from Tsai’s first election victory four years ago