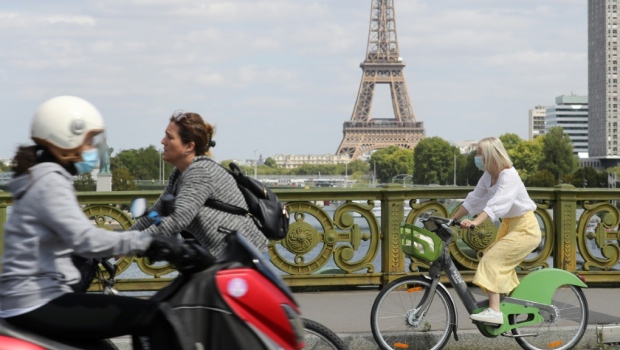 PARIS —
Germany and France drew up tougher rules on Thursday in line with a growing number of countries battling a resurgence in coronavirus infections with Paris making masks obligatory in all public places in a bid to curb a rise of new cases in the city.

European countries are seeing an increase in infections even as they struggle to balance new restrictions against the need for their economies to recover from the devastating impact of the first round of lockdowns.

Britain, South Korea and Rwanda are also tightening their restrictions as fears rise of a return to the draconian anti-virus curbs put in place earlier in the year.

The pandemic has killed more than 826,000 people worldwide since surfacing in China late last year and more than 24 million infections have been recorded.

Germany, the European Union’s biggest economy, will impose tougher rules on mask wearing and keep football fans out of stadiums until at the least the end of the year, under a draft proposal seen by AFP.

The measures — such as a minimum fine of 50 euros ($59) for flouting requirements on mask wearing — are likely to be officially agreed later Thursday.

As in other countries, Germany’s surge in coronavirus cases in recent weeks has been mainly blamed on summer travel and friends and family gatherings.

French Prime Minister Jean Castex announced on Thursday masks will be compulsory in all public places in the capital Paris, one of the hardest hit regions in France.

Official figures released in France on Wednesday showed more than 5,400 confirmed new cases in just 24 hours, with admissions to hospital and intensive care units on the rise.

Castex has warned a new lockdown cannot be ruled out even if the government will try to do everything to avoid one.

European government officials are also trying to instill discipline in their ranks to retain public trust in measures that restrict freedoms.

European Union trade boss Phil Hogan was forced to step down over a breach of guidelines in his home country of Ireland.

Britain, which left the EU in January, meanwhile reversed course and has called on students to wear masks when they return to class from next week.

Keeping mask wearing and other restrictions in place, Rwanda has lengthened its evening curfew and prevented movement in and out of the western area of Rusizi after a recent infections surge.

Rwanda on Tuesday hit a record 217 cases in one day and has recorded a third of its 3,625 cases in the past 10 days, with authorities blaming the spike on complacency and fatigue with social distancing measures.

In South Korea, the parliament was shut down on Thursday and a group of lawmakers were in self-quarantine as the country recorded more than 400 new coronavirus infections.

The country endured one of the worst early outbreaks of COVID19 outside mainland China before bringing it broadly under control with extensive tracing and testing.

The United States, however, broke with the toughening trend even though it leads the world in virus deaths and infections.

U.S. authorities now say asymptomatic people don’t need to test for COVID-19 if they have been exposed to someone diagnosed with the virus.

They had previously encouraged such people to get tested, but U.S. media reported political interference from the White House.

U.S. President Donald Trump has long been accused by critics of trying to play down the scale of the pandemic and focus on economic recovery ahead of his re-election bid in November.

The U.S. recovery from the coronavirus economic downturn is “highly uncertain” and many businesses will continue to struggle, a top Federal Reserve official said Wednesday.

Switzerland was the latest example to show how the pandemic has brought the global economy to its knees.

Switzerland, official figures showed, has plunged into recession after the coronavirus pandemic caused a “historic” 8.2-percent slump in economic activity in the second quarter.

Economies have picked up generally since then though there are concerns that the recovery appears to be slowing as coronavirus cases mount again, stoking fears of a repeat of the economically damaging lockdowns seen earlier this year.

In the growing toll on the air transport sector that has seen aircraft grounded worldwide, British aerospace giant Rolls-Royce on Thursday logged a £5.4 billion ($7.1 billion) net loss for the first half of 2020.

And flag carrier Air New Zealand announced a roughly US$300 million annual net loss after demand plummeted due to the pandemic.

Hopes for economic revival are partly pinned on the development of a vaccine, which companies and governments worldwide are racing to develop.

Peru on Wednesday began registering volunteers for clinical trials of a Chinese vaccine against the coronavirus.

Ryanair to reopen Cork Airport base and restore 20 routes for...

Southwest Airlines Takes Off For Myrtle Beach, S.C, Beginning May 23;...