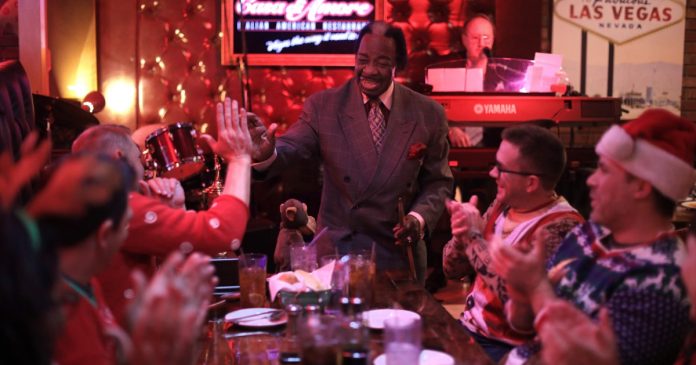 In Las Vegas, you never know what you’re going to get. A royal flush or just a pair. Free tickets to Cirque du Soleil or a flier for Spearmint Rhino. The best $9.99 prime rib ever or the worst all-you-can-eat buffet for which you’ve deigned to wait in line.

The same is true of the music lounges that dot the landscape like points of light on a star map. This most performative of cities has a siren-like draw for skilled musical talent. That pianist in the dapper suit singing happy birthday to the drunk guy at dinner might have been a part of the legendary Wrecking Crew.

So forget all about the $300 you lost in 15 minutes at the Wheel of Fortune slot machine, and focus instead on the musical jackpots that await. For recommendations we went to the pros: The Times asked Vegas lounge acts to share their favorite off-the-Strip hangouts, places where they like to catch other stellar musicians, get a stiff drink or sit down for a delectable meal.

It was a frigid Sunday in early December, and Paul Stubblefield was driving from Cleveland to Madison, Wis., to play a gig with Otis Redding. He had just purchased a new Cadillac but he wished he were in Redding’s Beechcraft H18 airplane.

Stubblefield was still miles outside of town when a news bulletin came over the radio: Redding’s plane had crashed into Lake Monona.

Stubblefield reflects on that tragic day while sitting in an outdoor booth at Casa Di Amore, a popular Italian restaurant where he plays drums and sings four nights a week. On this particular night he’s accompanied by pianist Randy Thomas, who was lead singer for the 1960s surf-rock band the Hondells and appeared in Frankie Avalon musicals including “Beach Blanket Bingo.”

“We’re both dinosaurs in this business,” Stubblefield jokes, cracking the same wide smile he greets regulars with when they walk into Casa Di Amore’s dining room, lined with tufted banquettes and black-and-white photos of Vegas crooners and long-gone casinos.

For an off-Strip recommendation, Stubblefield starts with the Dispensary Lounge, a family-owned dive bar that opened in 1976 and has the feeling of a Vegas lounge trapped in amber. It’s known as a hot jazz club, particularly on Friday and Saturday nights, when “all the great singers in town come there,” Stubblefield says. 2451 E. Tropicana Ave., Las Vegas; (702) 458-6343; thedispensarylounge.com

He also counts himself a fan of Kelly Clinton, who performs in the Piazza Lounge at the Tuscany Suites & Casino. A singer, dancer and comedian, Clinton does it all. Catch her Wednesday nights starting at 7:30. 255 E. Flamingo Road, Las Vegas; (702) 893-8933; tuscanylv.com/entertainment

When Lenore Rishel was 3 in Twin Falls, Idaho, her father brought home a 45 rpm phonograph. Young Lenore would look in the mirror and sing along with Sarah Vaughn records. Years later she saw Vaughn play in a lounge in downtown Las Vegas. If she could relive one moment in her life, she says, that would be it.

Rishel has been singing on Wednesday nights at Ichabod’s Lounge for six years, joined by Robbie Robinson on saxophone and Paul Stevenson on keys. Robinson was an early member of the Platters and has a lifetime achievement award from the Las Vegas Entertainers Hall of Fame.

Before her Vegas days, Rishel sang at the legendary Pikes Verdugo Oaks in Glendale while she was pregnant with her son.

“That was quite a wonderful way to be pregnant,” she says. “I got to sing and dress up, even though it was in maternity clothes.”

Another recommendation: the Italian American Club. Established in 1960, this place is a go-to for a variety of music, including acts that pay tribute to Rat Pack royalty and that capture the spirit of the big band era of swing. 2333 E. Sahara Ave., Las Vegas; (702) 457-3866; iacvegas.com

Conrad Hawthorne at the Piano Bar at Harrah’s

The Piano Bar is located on the Strip in a raucous room that opens up onto Harrah’s Casino. It’s loud and wild, but when singer Conrad Hawthorne launches into a passionate rendition of Sam Cooke’s “A Change Is Gonna Come,” the room goes suddenly quiet.

This is not a feat for a timid singer, and Hawthorne’s big voice and even bigger personality fill up the space — among the most popular piano bars around town — Thursdays through Sundays.

Born in Mississippi, Hawthorne began piano lessons at age 7 but soon gave them up in favor of writing his own songs and learning in his own way. He met his wife of in the mid-1970s, and the two fronted top-40 show bands all over the country and in the Caribbean. For Hawthorne, one highlight was opening for Louis Prima’s saxophonist Sam Butera in Atlantic City.

Hawthorne has been living and working in Vegas since 2000, and he’s been at the Piano Bar for more than a decade, often dueling on the ivories with one of his favorite players, Bonnie Mason.

“I absolutely love that room. It’s an open platform for making people smile and have a good time,” he says. “A lot of entertainers focus on the money aspect of what they do. I do not. I think what we do is not only a gift but also an open invitation to change people’s consciousness.”

For an off-Strip discovery, he recommends the Bootlegger Italian Bistro. Run by a family that has been feeding Las Vegas for more than 65 years, this restaurant serves up music nightly. Hawthorne favors the Monday night set by Santa Fe & the Fat City Horns in the Copa room. 7700 S. Las Vegas Blvd., Las Vegas; (702) 736-4939; bootleggerlasvegas.com

Hawthorne is an avid foodie and each week celebrates what he calls “burger Saturdays” at BarCode Burger Bar, a 24-hour restaurant that he says serves the best burgers in town. 1590 E. Flamingo Road, Las Vegas; (702) 294-2633; barcodeburgerbar.com