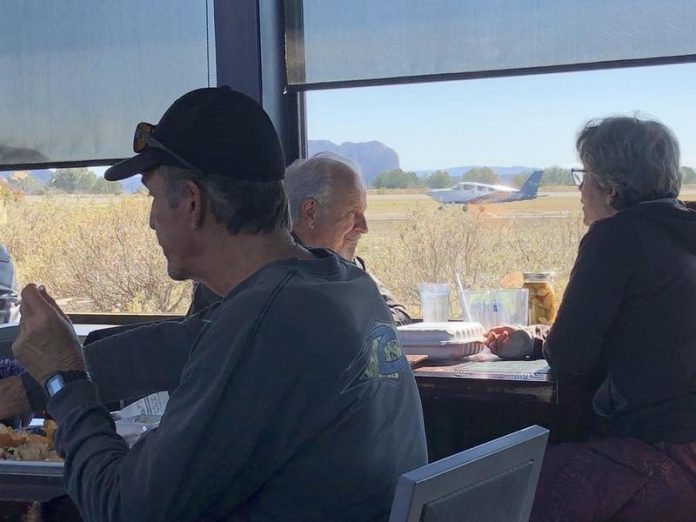 Peter Limberger’s not the first person with some new ideas for the Peru airport.

Limberger has no intentions of starting an airline, but he would like to make charter flights more available from Peru. Limberger this winter purchased Davenport- and Muscatine, Iowa-based Carver Aero from Iowa entrepreneur Roy Carver Jr.

Limberger took time recently to talk about some of his plans for the flight service he purchased, as well as some ways for Peru and Starved Rock Country to better capitalize on the resource it has in the Illinois Valley Regional Airport.

In early fall, he learned Carver was approximately 78 years old and might entertain the possibility of selling his service. An acquaintance urged Limberger to call Carver, who said he wasn’t sure if he wanted to sell the business he had created and run for three decades to “just anyone,” but he would consider it if the right people came along who wanted to continue or build on what he had built.

“We went over there, met. I said let’s do it. Eight weeks and the deal was done,” said Limberger.

“For two reasons: I am a pilot and I like flying and I have airplanes. That is sort of the hobby side of everything. I don’t want to mix hobby and business, but obviously aviation is a business. I was always interested in the possibility to start doing something in the field of aviation — even way back when, when I was in Germany,” Limberger said. “At one point of time I tried to buy a manufacturing company for airplanes; it just didn’t work out at that time.

“And here, for four or five years I have been looking, semi-actively, at opportunities in our region. Right now we invest only in our region, which is the core Midwest, Michigan, Illinois, Iowa.”

He said his business will continue to offer flights out of the Iowa airports, but he’d love to create a station or satellite office at Peru with a couple of airplanes or jets.

“We will continue to do exactly the things as they did. We’ll try to double up the business, to make it larger. What else can we do? Can we increase the maintenance? What are the bottlenecks? Can we increase the charter business? Do we need more airplanes? Should we (base planes) at additional locations?”

Even before Limberger bought the business, if a customer called and asked Carver Aero to show up at the Peru airport and provide a flight to a business meeting in the Midwest or a town in the Rocky Mountains or even internationally, the company could provide that service.

He said he has been talking with city officials and Peru Mayor Scott Harl for many years.

“We always talk about what can we do to make better use of this airport?” he said. “Everybody knows the airport is a huge asset, but very underutilized. It has huge potential. What can we do to use the potential? But you need an idea. You need an angle somewhere. Two or three years ago with the air show, this was a little thing … it turned into an annual event and a big draw of spectators.”

Peru finance director Justin Miller confirmed that he has chatted with Limberger and there have been informal discussions. Miller said on his own he has been making some calculations about various possibilities at the airport.

“We have had very preliminary discussions,” Miller said. He said he had heard some of Limberger’s ideas for further development at the airport and he has been digesting some of the ideas and also calculating ways.

Miller noted the city could stand to gain by having more planes at the airport regularly, as it sells fuel and can benefit especially from jet fuel tax … as well as rental space in hangars or office spaces

Limberger said the airport, for pilots and potential passengers, has a great location next to Interstate 80, near Interstate 39, with free parking, “easy on, easy off.”

But he believes the airport also has land available for development, with potential of bringing people out who have no flight plans.

“I would suggest that something is built that really attracts people beyond the people who need to fly out. A nice, fancy restaurant with a porch which looks out to the runway and you could watch,” he said. “It’s right off the highway and at the same time it’s close to the city. Make it a destination.”

Pilots and people who charter expensive but convenient flights could benefit, too. He said he and city officials including the mayor have been talking and he believes the airport needs a bigger, nicer terminal.

Currently, offices for the airport, for the Midwest Avtech mechanics business, a conference and media room, a lounge area with a couple of couches and soda machines occupy a main building.

“Actually, it’s not just me, the city and the mayor they have been talking that it should have a nicer terminal. It’s way too small. You need office space. You need a space for pilots to do their flight plans. And you need a nice environment for people who pay $10,000 to fly somewhere,” he said.

He said that price might sound high, but it’s not terrible if you consider if a business from somewhere within a 50- or 70-mile radius has to fly six or seven people to a meeting in a small town in Idaho. It can be better than sending people on a two-hour trip with a two-hour wait to a Chicago airport, and then a flight to a large airport, and another flight or car rentals to the town where the meeting is taking place, plus one or two overnight stays and meals.

Limberger said he would love to see more businesses take interest in the region or at the regional airport.

“The more business there is, the better it is for my businesses,” he said.

“What I think, and this is now the bigger picture, Starved Rock Country: The park has 2-3 million visitors,” he continued. “Every year, people, mostly from the suburbs and Chicago, they come, they hike for three hours or four hours and leave. If they could capture just 5% of these 3 million people within the region, to show we have more to offer; why don’t you stay another four hours or stay overnight?

“Why don’t you go to the airport and see a little museum, or video on aviation, have a nice meal and see a couple of airplanes flying — a destination that attracts people who come here anyway. Anyway, 5% of 3 million people is 150,000.

“We cannot build big enough. There’s plenty of traffic. There are people on the highway anyway who are interested for a destination, the airport could be a perfect destination.”

Regarding the Rocket brew pub he is constructing at First and Joliet streets in La Salle, Limberger said it will be the third location for his chain of pubs and eateries within the Illinois and Michigan Canal Corridor and associated with the Tangled Roots brewery, including the Lone Buffalo in Ottawa and the Lock & Mule at Lockport.

“Everyone here knows of The Rocket, the big, fast train from the (early 1900s), which brought thousands and thousands of people out here from Chicago. It was a thriving city. We hope, with the development here (at The Rocket), and The Kaskaskia will be the next one, we hope to contribute to bring back part of the dynamics that this region had in the 1910s, 20s, 30s.”